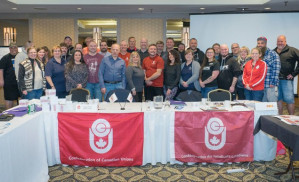 In March 2018, the Executive Board of the Confederation of Canadian Unions met in Toronto to discuss recent achievements, issues and planned activity for the months ahead. Also, the CCU Labour School was held, which featured three speakers. Former CCU President Joanie Cameron Pritchett spoke on the issue of sexual violence, and discussed legislative changes […]