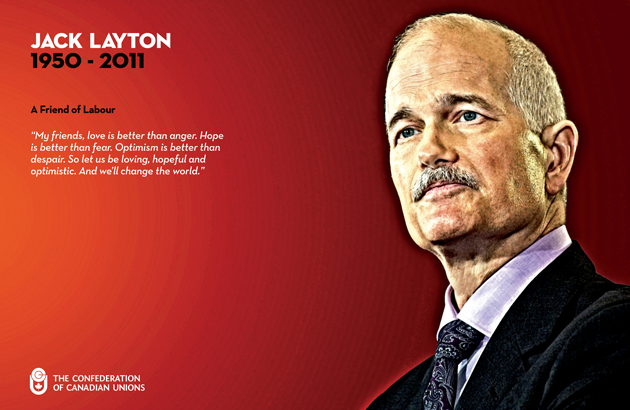 There comes along a person every generation or so that captures the hopes and dreams of millions of people everywhere, whose optimism, compassion and energy drive others to take action and help create a better world.

Jack Layton was such an individual.

The Confederation of Canadian Unions is deeply saddened by his untimely passing. Jack Layton fought bravely but lost his second battle with cancer early on August 22 at the age of 61. He was surrounded in his Toronto home by friends and family.

His death is not only a huge blow to the political party he led, but to working people throughout Canada and the country as a whole.

Jack Layton’s life defined public service. He became a Toronto City Councillor in 1982 and took on issues that were at the time seen as controversial. He advocated for the rights of persons living in AIDS, became an earlier supporter of a woman’s right to choose, and proposed higher funding for the arts and housing for homeless people.

Layton was also an unequivocal supporter of workers’ rights and unions. It is important to note that the political party he led for almost ten years, the NDP, has structural, political and financial ties to labour unions throughout the country.

The so-called “Happy Warrior” led his party to a huge breakthrough during the June 2011 federal election, where for the first time, the NDP became the official opposition.

His final statement to Canada was written on August 20, 2011, and summarizes his commitment to social justice and fairness, as well as his hope for a better future. “My friends,” he wrote, “Love is better than anger. Hope is better than fear. Optimism is better than despair. So let us be loving, hopeful and optimistic. And we’ll change the world.”

A state funeral will be held on Saturday, August 27 at Roy Thompson Hall in Toronto.

On a personal note, I wanted to convey my deepest sympathy to the Layton family. I can only imagine their loss.

Layton had such an impact on our country and certainly on so many lives of Canadians. I was one such Canadian. Layton was the greatest leader I’ve known in my lifetime and I will continue to remember him throughout my career as a union activist and social justice crusader.

I will always remember the exact moment when I heard the news of his passing. I was driving and looked at the sky and it was the most spectacular blue – so crisp and clear – and the clouds were so evenly layered into the horizon. It was a beautiful image, just as “smiling Jack” was a beautiful person.

This friend of labour and ally of working people will be sorely missed.