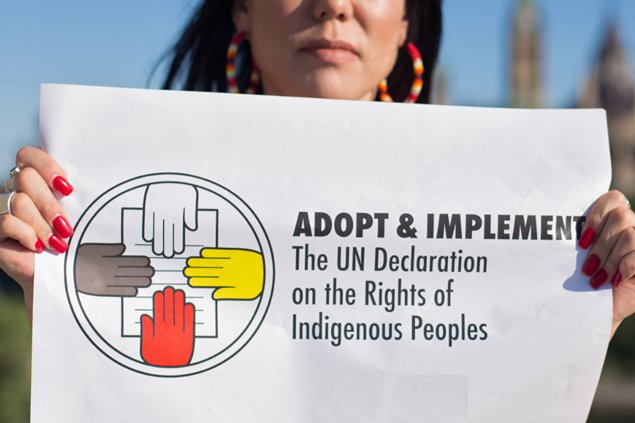 Below is a letter written by CCU President Kelly Johnson to Canada’s Senate, advocating for the passage of Bill C-262, which will ensure that the laws of Canada are in harmony with the United Nations Declaration on the Rights of Indigenous Peoples (UNDRIP).

The letter has been sent to all 105 senators. To help raise awareness about the bill and the goals set out in UNDRIP, please share widely.

Senate of Canada
Ottawa, ON
K1A 0A4

On behalf of the Confederation of Canadian Unions (CCU), the largest affiliation of independent unions in the country, I am urging you to pass Bill C-262, an act to ensure the laws of Canada are in harmony with the United Nations Declaration on the Rights of Indigenous Peoples (UNDRIP).

Since our founding in 1969, the CCU has advocated for the equal rights of all people in Canada and around the world, including the Indigenous peoples of this land.

In April 2018, the CCU publicly endorsed the recommendations of the Truth and Reconciliation Commission of Canada and its call to action in fully implementing the conditions set out in UNDRIP, and our organization will continue to work with Indigenous peoples to recognize and uphold these rights.

The Truth and Reconciliation Commission also stated that the adoption and implementation of UNDRIP is key to genuine and lasting reconciliation between the Indigenous and the Settler peoples of Canada (Call to Action 43).

As you know, after almost three decades of negotiation, the United Nations finally adopted UNDRIP in 2007, and in May 2016, Canada officially removed its embarrassing objector status to the document, bringing us one step closer to joining the overwhelming majority of countries in the world who have already supported it.

Previous Canadian governments have been reticent to implement UNDRIP in its entirely, simply referring to it as an “aspirational” document. Yet the current government has stated its recognition of and support for its implementation.

Among the fundamental principles of UNDRIP is its repeated insistence on Indigenous peoples’ right to free, prior and informed consent (FPIC) on any economic or political project that would directly affect their communities. This isn’t just about creating the conditions of equality between peoples, it’s a fundamental democratic right based on freedom and self-determination.

Implementing the conditions set out in UNDRIP will not be burdensome. It would simply guarantee the rights that non-Indigenous people in Canada have enjoyed for decades.

A large number of not-for-profit, labour and social organizations throughout Canada, all of whom understand the centuries-long oppression and exploitation of Indigenous peoples, have publicly endorsed the implementation of UNDRIP.

The fact is that every single one of us in Canada has a role to play in reconciliation, whether we are working people, wage earners or senators. Once again, I urge you to pass Bill C-262, implement UNDRIP, and help build a lasting reconciliation between the Indigenous and non-Indigenous peoples throughout our great land.

If you have any questions about the support of UNDRIP by the CCU and independent unions in Canada, please do not hesitate to contact me. I look forward to speaking with you.