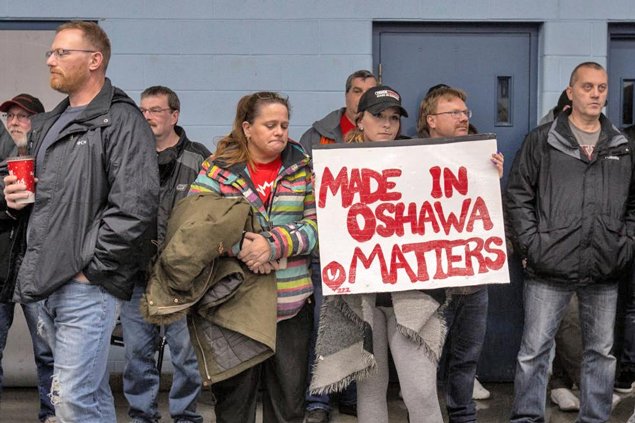 Canadians were stunned when General Motors (GM) recently announced its plans to cut 15% of its salaried workforce and close five plants throughout North America, one of them being the Oshawa plant that employs more than 2,500 workers. First opened on November 7, 1953, the plant employed as many as 23,000 people during the 1980s.

The Confederation of Canadian Unions stands in support with the workers, their families, and the community, but real policy alternatives must be developed to prevent this from happening again to others throughout the country.

While workers at the plant and its union, UNIFOR Local 222, are doing everything they can to fight for their jobs and pensions, Prime Minister Justin Trudeau was in warm, sunny Argentina just three days later – and not without irony – signing a corporate, free trade agreement with the United States and Mexico that some refer to as “NAFTA 2.0.”

This comes exactly 10 years after General Motors received a $60 billion bailout package from the Canadian, Ontario and U.S. governments, which included $10.8 billion of Canadian government assistance in exchange for 12% ownership of company shares.

Since then, the former Ontario government and former federal government of Stephen Harper sold its shares back to GM – just when it began making a profit again, of course. UNIFOR is correctly arguing that our governments should have kept its shares and used the ownership as leverage to force GM to re-invest and maintain jobs in Oshawa (as well as St. Catharines).

After giving GM billions of dollars of bailout funds, both taxpayers and members of UNIFOR Local 222 alike are right when they call this “bailout-and-run” calamity a slap in the face.

For forty years, we’ve been told over and over again that corporate free trade agreements, along with tax cuts for business and the investment class, attacks on unions and collective bargaining, and government spending cuts, were going to create a climate for investment that would rain good-paying, middle class jobs.

And the evidence has shown, in painful detail, this has been proven demonstrably, spectacularly, fabulously, head-bangingly, and mind-crushingly false. Advocates for corporate, free trade might as well start believing the earth is flat. Yet in the parallel universe of Ontario Premier Doug Ford, whose favourite punchline is “Ontario is open for business,” this is just another financial decision for his corporate friends.

UNIFOR is currently calling on GM to allocate product to the Oshawa plant past its current run date of December 2019. The plant is one of the most efficient and profitable in North America, with a decorated and highly skilled workforce. At the same time, GM sales and profit margins are both increasing, and its balance sheets are, even according to the business media, very healthy.

Since the early 1970s, the CCU has called for the elimination of corporate welfare bailouts and instead, the establishment of a nationwide, made-in-Canada industrial strategy of democratic, public ownership that protects decent jobs, our environment and extends workers’ rights. Canada remains one of the few countries in the world that doesn’t have its own industrial strategy.

As long as so-called free trade agreements give corporations almost unlimited power over workers and governments, and attacks on workers’ rights and increasing inequality continue, the middle class in Canada will be hollowed out, and more examples of de-industrialization and economic uncertainty will put further communities throughout the country at risk.

Unfortunately, the entire GM “bailout-and-run” debacle of the past decade isn’t the beginning of this process, but just a continuation of it.