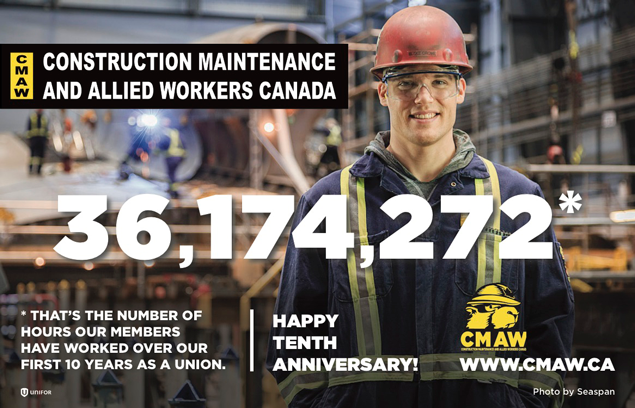 Happy birthday, CMAW! The Construction, Maintenance and Allied Workers Canada (CMAW) is celebrating its 10th anniversary. The democratic, independent union, which became an affiliate of the Confederation of Canadian Unions in 2013, represents over 7,000 workers in locals throughout British Columbia and Alberta.

As it states on the CMAW website, it’s role is to ” establish and maintain the best possible standards of pay, benefits, and working conditions for members; to organize the unorganized; to promote progressive labour and human rights legislation; to cooperate with other unions and organizations to achieve these aims; to encourage social unionism; to promote and champion workers’ legitimate struggles; to provide aid and assistance to members so that they may share in benefits of collective agreements and favourable employment legislation; and to inform and educate workers on the principles and policies of the organization and the benefits they may achieve through organization and collective bargaining.”

The Confederation of Canadian Unions congratulates CMAW on ten years of standing up for workers rights both inside and outside the labour movement, its commitment to social justice and fairness, and its continued efforts to organize and protect workers throughout British Columbia and Alberta.