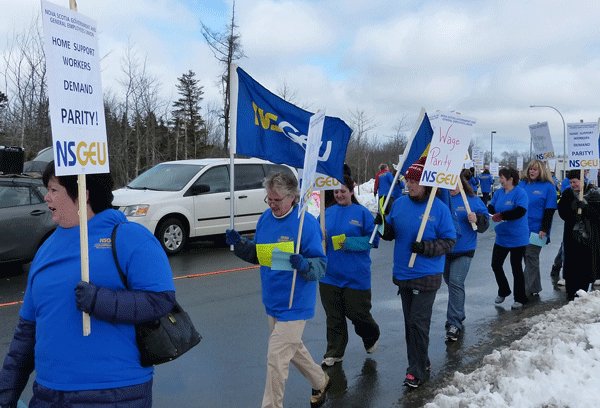 The recently elected Nova Scotia Liberals have recalled the Legislature in order to pass a law preventing a strike by Northwood homecare workers, represented by the Nova Scotia Government & General Employees Union (NSGEU).

The government refused the union’s proposal of binding arbitration and forced a strike situation with the specific intent of enacting this legislation attacking the workers right to strike, in spite of the fact that Nova Scotia Premier Stephen McNeil spoke vehemently against such Bills in the past as a member of the opposition.

“It has been proven from one end of this country to the other, this legislation will not work,” McNeil once said about essential services legislation on December 6, 2007.

Despite his past statements, the new Premier and his government have tabled essential services legislation at the first opportunity.

In the last seven years, personal care workers have faced more violence on the job than any other workers in Nova Scotia and are often subjected to low wages and irregular hours of work, yet they still provide high quality care and support to their patients. It’s the government’s commitment to Nova Scotians in need of care that has to be questioned, not that of the workers or their union.

The Confederation of Canadian Unions calls on the government of Nova Scotia and Premier Stephen McNeil to bargain in good faith with the Northwood workers, to reach a fair agreement that includes the equality, wage parity and the respect that they deserve.

Restrictions on the right to strike for home care workers in Nova Scotia are a blatant abdication on the part of the government and employers of their obligation to bargain in good faith. The CCU stands in solidarity with the Northwood workers and calls on the Government of Nova Scotia to respect the right to strike in all sectors of the province.

Read the CCU’s letter to the premier of Nova Scotia