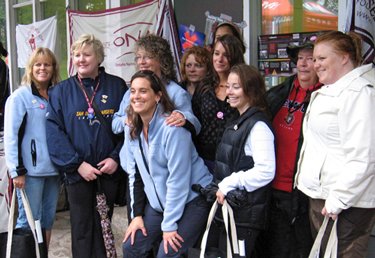 For the second year in a row, Barrie residents didn’t have to travel on a busy Highway 400 to Toronto in order to celebrate Labour Day.

Organized by the Confederation of Canadian Unions and the Ontario Nurses Association, the event enjoyed a huge turnout. Over 500 people came to the park throughout the day to take part.

Labour Day celebrates the achievements of working people throughout the country. “We wanted to acknowledge the contribution that workers have made to the community during the year,” says Robin Smith, event organizer and CCU member. “It’s important that unions work together in protecting the gains we’ve won and fighting for greater social justice and equality.

The origins of Labour Day in Canada are traced back to April 14, 1872, when a parade was staged in Toronto to support the Typographical Union’s strike for a nine hour workday. After 24 members of the union were arrested, labour leaders called for a demonstration to take place on September 3rd of that year. Yet it was only in 1894 that the government of Canada made it an official holiday.

Working people and labour unions have struggled for over a century to make Canada a better place for all. This Labour Day in Barrie, we remembered the sacrifices they made decades ago and continue to work together in building a better future.