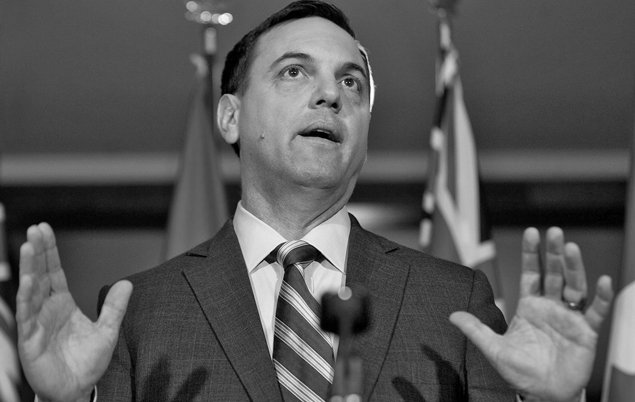 The problem is that the Opposition Leader’s ideas aren’t new or revolutionary. They are simply a ramped-up, streamlined extension of the tired, old conservative economic ideology that has caused Ontario’s economic problems in the first place and will only worsen the economy for the vast majority in the province.

The United Nations just released a report that sites the shrinking income share of the middle class one of the single largest threats to sustainable economic growth. According to the report, the share of the national income going to workers has dropped by 10% in developed countries since 1975.

Workers are getting a smaller share of the economic pie, while most of the real income growth has gone to corporations and the wealthy. This income inequality is the driving force behind the problems of economic stagnation, and Hudak’s polices directed at creating a low-wage economy will only make the problem worse.

The highlights of Tim Hudak’s economic plan are an attack on unions and the rampant and widespread privatization of government services. Both of these economic agendas have been shown to create a lower wage economy and shrink both the standard of living and size of the middle class.

Admittedly, Hudak has just recently backed off this stance somewhat, but not because he doesn’t believe in it. It is because even he has realized that a vast majority Ontarians don’t share his vision. So now, the Conservative leader is repackaging his policies of a low wage economy in the promise of widespread privatization of government programs and services.

Privatization, as a rule, lowers wages and weakens benefits, and turns the proceeds of these into corporate profits. It’s yet another scheme to promote a low wage economy, take income away from people and revenue from government, and instead place the funds in the profit margins of Big Business and the wealthy.

A lower wage economy creates debt and stifles economic growth in a variety of ways:

1) It reduces the level of income in the hands of workers and lowers consumer demand;

2) It causes working families to have to borrow more, mortgaging their future in order to live today and increasing the already staggering private debt load on Canadian families;

3) It starves the government of income and reduces services, since workers in Ontario pay a far greater percentage of overall taxes than do corporations;

4) It causes government debt because of the need of more services to support a poorer working (and unemployed) public, and decreases overall tax revenues; and

5) It creates a huge social debt in Ontario as wages fall and people aren’t able to save for their retirement or their children’s education.

Tim Hudak’s vision of a leaner, meaner Ontario will only create debt and suppress economic growth by increasing income inequality and further reducing family income, all to the benefit of corporate profits.

Ontario doesn’t need the same old polices that leave the working class behind and everyone else going nowhere. We need new ideas that ensure the middle class and working people can share in the fruits of economic growth and provide for their children’s future.