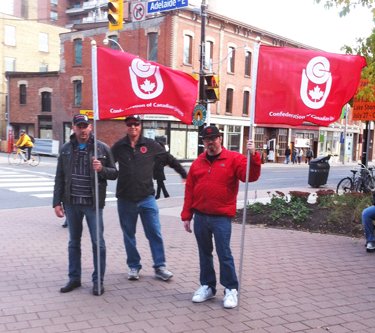 On October 15, 2011, CCU Vice President John Harahan attended the Occupy Nova Scotia Rally in Halifax in order to express the CCU’s support of and solidarity with the protesters.

Attempts by the media to portray these protests as disorganized and lacking a uniform message could not be farther from the truth. The speakers at the Halifax rally were articulate, on topic, and very succinct as to the nature of their grievances.

They are quite simply protesting a system of government and method of commerce that allows the debt of banks and corporations to be absorbed by taxpayers, and government service cuts to be used to pay for corporate abuses.

The CCU fully supports the positions of the Occupy Movement, and believes that workers should not be forced to take less in wages and benefits for their families in order to pay for the right of the rich to abuse the system.

A week later on October 26, 2011, CCU officers and delegates from the CCU convention participated in a march with the Occupy Toronto movement. Workers, students, seniors and union members marched from the Occupy Toronto site at St. James Park to the Novotel Toronto hotel.

The march was called to show solidarity with hotel workers and call for the right of workers to organize, amid allegations that Novotel has interfered with its workers attempting to form unions.

CCU President Joanie Cameron Pritchett spoke at the rally in support of the right of workers to form trade unions, firmly stating the CCU’s position that workers’ rights are human rights.

Pritchett later gave an interview with Global News highlighting the CCU’s position of support for the right of all workers to unionize.