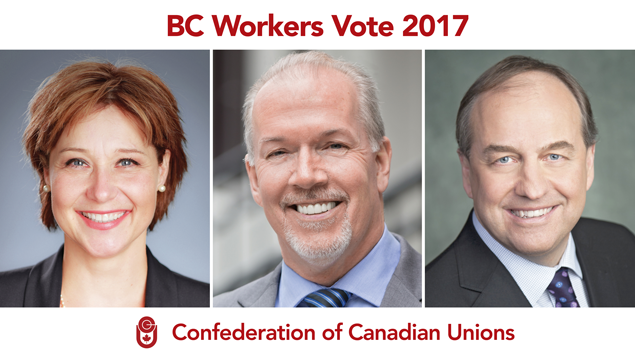 Just as in previous elections, the Confederation of Canadian Unions is once again establishing a political education campaign, named BC Workers Vote, to help its membership make informed voting choices for the British Columbia Election on May 9, 2017.

The fourteen questions below have been sent to all four major parties in the province, including the Conservative Party, the Liberal Party, the New Democratic Party and the Green Party. The Conservatives have not yet given us their responses.

The responses that would benefit working families the most came from the New Democratic Party. The BC NDP, under the leadership of John Horgan, have a list of clear-cut proposals to create good-paying jobs, reduce poverty and economic inequality, and protect workers’ rights. The BC NDP also are promising to build social housing, provide specific incentives for business to create jobs in rural areas (including in the wood and building industries), and cancel the unpopular Medical Service Plan (MSP) fees. In addition, Horgan and the NDP are making further commitments to hire more teachers, doctors and nurses, and create a more progressive taxation system needed to pay for them.

The BC Greens have also put forth a set of progressive campaign proposals centred on environmental sustainability, equality and protection of social services. The Greens were also outspoken in their support of unions and further efforts to protect workers’ rights. In addition, they are campaigning on the increasingly-popular idea of establishing a universal, basic income to help reduce poverty throughout the province. The Greens also have a specific long-term forestry plan and want to eliminate MSP fees. Finally, the party wants to invest more in health care and education and has a clear plan to reduce greenhouse gas emissions. 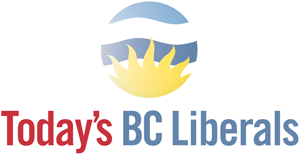 The concern about the BC Liberals, who have been in power since 2001, is their attacks on the rights of unions and working people, their management of an economy that is increasingly becoming more unequal and leaving many behind, and their support of taxation policies that benefit the very wealthy at the expense of everyone else. The Party does make important promises such as investing more in health care and hiring more teachers, but they are difficult to believe when they have repeatedly cut taxes, especially on the rich and corporations, and aim to continue doing so. Finally, the Liberal Party’s policies regarding the export of raw logs are vague, and their claim that they are the “only party in BC with a plan for rural British Columbia” is simply untrue.

The CCU is establishing a political education campaign to help its membership make informed voting choices for the 2017 British Columbia general election. The following fourteen questions will be sent to all four major parties in the province, including the Conservative Party, the Liberal Party, the New Democratic Party and the Green Party. The answers will be posted on our website.

1. Statistics Canada reports unionized workers enjoy 14 to 20 percent higher wages than non-unionized workers in the same line of work, as well as stronger pensions, superior health and safety standards, longer paid vacation time, better health and drug benefits, and more rights in the workplace. Does your party believe that unions play a positive role in our economy? If so, what policies will your party implement to create a climate that is easier for unions to organize?

5. A recent Environics Research poll showed that 90% of British Columbians think there should be income tax increases for the wealthiest income earners, and 67% believe that major corporations pay less tax than they should. Since the beginning of the new millennium, the wealthiest citizens and businesses have enjoyed tax breaks, supposedly to “create jobs,” yet the unemployment rate in BC is the same today as it was in 2000, at approximately 6%. Does your party believe that those who benefit the most should pay their fair share of taxes?

6. The resource extraction-only policies have left this province split. Urban areas are seeing growth and opportunities like no other jurisdiction in Canada, while rural British Columbia is seeing negative growth, increasing unemployment and limited job prospects. What plans does your party have to encourage secondary industries to invest in rural British Columbia?

7. Medical Service Plan payments are a user fee unlike anywhere else in Canada. This tax unfairly targets low and middle income families. Does your party support scrapping the MSP premiums?

8. Our publicly administered, universal health care system is cherished throughout British Columbia. More of these services, however, are being de-funded and privatized. What policies will your party implement to ensure that health care in the province remains under public control and is accessible to everyone?

10. One of the most important policies for creating a better education system is reducing class sizes. With the recent court ruling in favour of smaller class sizes, what specific policies will your party implement to hire more teachers and reduce class sizes in primary and secondary schools in British Columbia?

12. Each year, millions of raw logs and other natural resources are shipped to value-added industries in other countries. What specific plans does your party have to prevent this and instead create high-value secondary industries in British Columbia?

13. British Columbians care deeply about our environment and believe that climate change is a major issue. What will your party do to reduce our carbon footprint and help lower greenhouse gas emissions?

14. Where does your party stand in relation to indigenous rights? What plans do you have in place that ensure meaningful discussions around the integration of indigenous peoples into the forestry and mining sectors, as well as other areas of the economy that flow from their traditional lands? How are you going to help with social issues facing many indigenous people on reserves across this province?