“The Private and Public Workers of Canada (PPWC) has been a leading force for environmental sustainability, First Nations rights and the creation and protection of jobs in the province of British Columbia for years. After more than a decade and a half of Liberal Party neglect on those issues, there was finally a ray of hope last May when an NDP government was formed under the leadership of John Horgan, along with support from the BC Green Party.

Having said this, jobs in the pulp and paper industry continue to be destroyed because of raw log exports, while BCs diminished forests and First Nations communities are under continuous assault, without any intervention or help from the NDP government.

PPWC President Arnold Berkov has released a statement on behalf of the union which calls on BC’s Forests Minister, Doug Donaldson, and Premier Horgan to follow through on campaign promises and take the lead on protecting jobs, revitalizing forests and rural communities, and bringing First Nations into partnerships with resource industries.

As Berkov writes: “Staying silent in the face of more mill closures, more forest depletion and continued failure to reconcile with First Nations is not an option.”

It’s time for the NDP government to take action now on these vitally important issues. 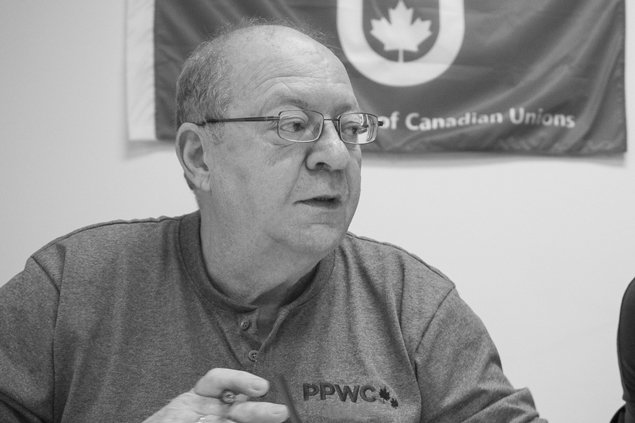 Doug Donaldson understands better than most how neglected BC’s forests are, and how that neglect is mirrored in troubling job losses and missed employment opportunities in rural towns and First Nations communities.

As BC’s Forests Minister, he is also the MLA for the vast Stikine riding where Highway 37 is a gateway to old-growth forests that have been logged for decades with one goal in mind: to strip them of their trees and send virtually every log out of the province, in raw, unprocessed form.

Donaldson’s riding is also home to a mothballed pulp mill, idled sawmills, and troublingly few value-added mills, including one – Kyahwood Forest Products – that is First Nation-owned, employs mostly First Nation people from the small community of Moricetown, and that ought to be the norm in BC, not the exception.

Donaldson knows all of this. He also knows that just 10 days after Premier John Horgan named him to Cabinet, the Somass sawmill in Port Alberni closed, ending good-paying jobs for 80 people at a mill whose history traces to the 1930s.

Western Forest Products, which put those people out of work, is BC’s biggest coastal forest company and a major exporter of raw, unprocessed old-growth logs.

Donaldson and his New Democratic Party colleagues were silent on Somass’s closure. In contrast, just months earlier, John Horgan travelled to a recently closed sawmill in Merritt, where against a backdrop of a large sign reading Closed by Christy Clark he lashed out at the Liberals for failing to help a “community in distress.”

Well the time for posturing is over. Horgan is Premier. He and his Forests Minister, whose file now includes “rural development”, must act. It’s up to them to lead on the forestry and rural revitalization files.

Were it not for the efforts of my union, at least one other sawmill in the same riding that includes Port Alberni would be down by now. We see no signs of action from the government. What’s its plan, if any?

During the last term of the Liberal government, more raw logs left BC than at any other four-year span in the province’s history. In 2016 alone, enough unprocessed logs left the province to frame 134,000 homes. More troubling, we see that de facto log exports are regularly occurring in the interior of the province, where “have” regions become the sources of logs for the “have nots”. The Merritt mill closure was partly caught up in that ugly reality.

Perpetuating the status quo translates into a wholesale assault on our coast’s diminished forests, rural communities, and First Nations, a reality that Scott Fraser, Port Alberni’s MLA and Minister of Indigenous Affairs and Reconciliation understands better than most.

Donaldson, Fraser, and all their Cabinet colleagues, have signed mandate letters that explicitly commit them to implementing the UN Declaration on the Rights of Indigenous Peoples.
I’ve read that document. I see what’s happening on First Nation lands. I know that we can and we must do better as an industry and as a society by bringing First Nations into true partnerships with resource industries. But I am starting to seriously wonder whether the same can be said of this government.

It’s time for bold action by government, driven by a vision of what is socially, economically and ecologically just. Here’s what my union believes is possible and that will have the ultimate support of many First Nations, environmental organizations and some forest companies:

More old-growth forests protected. An end to raw log exports. Increased forest industry employment based on getting greater value from every log we cut, rather than shipping it off in unprocessed form.

By staying silent on mill closures and allowing raw log exports to continue unchecked, our government is allowing our pockets to be fleeced.

Last year, Horgan tried to exploit the Merritt mill closure to his political advantage. Today, the buck stops with him, Donaldson, Fraser and the rest of the NDP Cabinet.

Staying silent in the face of more mill closures, more forest depletion and continued failure to reconcile with First Nations is not an option.

Arnold Bercov is president of the Public and Private Workers of Canada
www.ppwc.ca