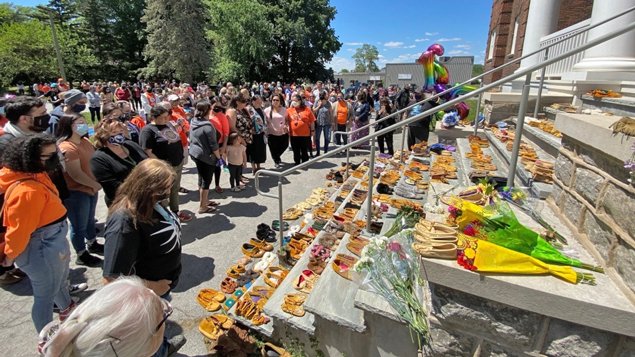 215 Indigenous children at a residential school site in Tk’emlúps te Secwépemc have been found in an unmarked mass grave; some believed to be as young as three years old, and all these missing children are believed to be undocumented deaths. Indigenous communities and allies are demanding that the search continues.

Because 150,000 First Nations, Métis and Inuit children were placed in residential schools between 1870 and 1996.

Because 4,100 children are recorded as having died while attending these schools. However, former Senator Murray Sinclair, who chaired the Truth and Reconciliation Commission (TRC), said he believes the death count could be 5 to 10 times higher due to the schools’ poor burial records.

Because while 1300 different types of schools across Canada have been identified that Indigenous children were sent or attended, only 139 residential schools were documented as part of the TRC.

The discovery of these children has been horrifying, shocking, saddening and traumatic. It has left many wondering what can we do?

A 24-hour national Indian Residential School Crisis Line is available to provide support to former students and those affected. People can access emotional and crisis referral services by calling: 1-866-925-4419.

Emotional, cultural and professional support services are also available to Survivors and their families through the Indian Residential Schools Resolution Health Support Program. Services can be accessed on an individual, family or group basis.