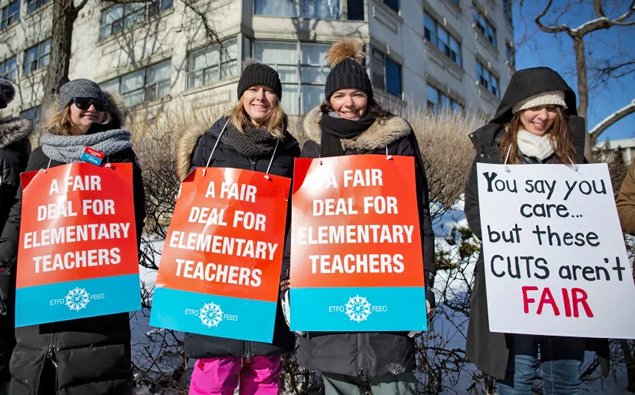 There’s an old saying: “You don’t know what you’ve got until it’s gone.”

There are millions of people born every decade in this country who expect certain rights and freedoms just by being Canadian. One of them is public education, with schools and teachers that are properly and equitably funded.

In the province of Ontario, high school, elementary, Catholic and French teachers have been without a contract since August 31, and months of negotiations between their unions and the province have shown little progress.

The fight for public education taking place in the province is a battle that could be similarly told of any province or territory in the country. A government who won the last election with a minority of the vote is cutting billions from education, increasing class sizes and eliminating services to make way for tax cuts that mostly benefit the wealthy.

The importance of education is something that CCU members AESES (Association of Employees Supporting Education Services), YUSA (York University Staff Association), NSUPE (Nova Scotia Union of Public and Private Employees) and PPWC (Public and Private Workers of Canada) Local 26 understand all too well. They can tell you about the many struggles they’ve been through in protecting public education.

In the current round of bargaining in Ontario, teachers and educational support workers throughout the province are seeking salary increases of approximately 2% a year, which doesn’t even keep pace with the current rate of inflation.

Doug Ford’s Conservative government is only offering a one-per-cent increase per year. In fact, last year it passed legislation to cap increases for all public sector workers at one per cent for three years. Unions are challenging the law in court since it violates collective bargaining rights by bypassing the negotiation process.

As well, Ford originally wanted to increase average high school class sizes from 22 to 28 over four years, which would have been a disaster. According to research by the province’s own financial watchdog, this would mean 10,000 fewer teachers in the system. The cuts so far have already led to schools offering hundreds of fewer courses. Teachers unions responded by implementing work to rule and rotating strikes.

It’s a story we’re all familiar with. But this time, something different is happening.

The overwhelming opposition to the government’s education cuts hasn’t just come from teachers and support workers, like it did in previous eras of cutbacks and strikes, but by parents and citizens who understand the value of public education, and the instrumental role it plays in benefitting young people and communities throughout the province. Even high school students are walking out of school over larger classes and fewer course options.

Recently, Education Minister Stephen Lecce partially backed down on the issue, now aiming to increase them from 22 to 23, which is still a step in the wrong direction, of course.

But it shows us what the history books have said all along: rights and freedoms, including public education, aren’t handed down to us. They are fought and struggled for from below.

Teachers have already organized two huge demonstrations of solidarity in as many weeks at the Ontario Legislature, in what even the corporate media admits is a “historic show of unity.” English, French, junior school, high school, and retired teachers, school support workers, students, parents (and yes, even puppies) came out to show the government that they aren’t going to back down.

Like other services, public education is an enormous economic and social benefit to any country, and ensuring its adequate funding shouldn’t be an issue. According to Statistics Canada, the effective, combined federal-provincial corporate tax rate has been cut in half in Canada since the late 1980s, and it’s currently situated well below international competitors. While taxes on the wealthy have fallen during the same time as well.

There is no reason why a genuinely progressive taxation system couldn’t be implemented in Canada once again to properly fund public education and ensure that teachers and educational support workers who give it their all every single day maintain decent working conditions, benefits and pensions.

Canadians love to believe that the rights they have today will always be guaranteed. But this just isn’t so, because whatever can be created can also be destroyed. We really don’t know what we’ve got until it’s gone, and it is the labour movement and working people now who are standing up for public education so that it remains a right for generations of students in the future.