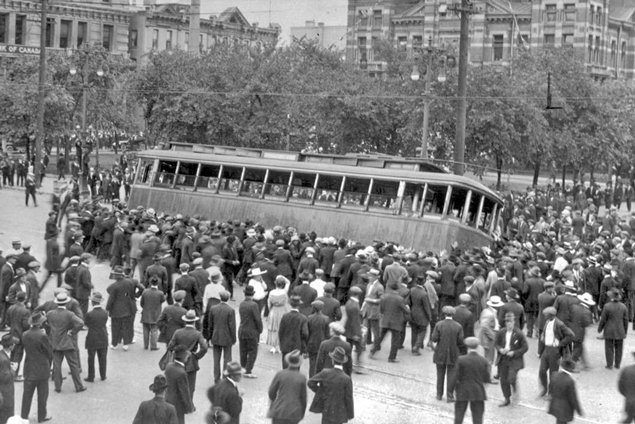 It was one hundred years ago that the guns fell silent in Europe from the Great War, and tens of thousands of Canadian soldiers returned home, only to find empty factories and unemployment. For those that did find work, it was under grueling conditions for low pay.

Adding to this was galloping inflation, making it nearly impossible for working class families to escape poverty, leading to further anger and mistrust from workers against federal and provincial governments who cared very little.

These concerns culminated in one of the greatest upheavals in modern world history. The Winnipeg General Strike, which took place in 1919, may have failed to create a revolution, but it gave birth to a working-class movement that created revolutionary advancements for workers’ and women’s rights, social justice and equity throughout Canada, right up until today.

On May 15, 1919 in Winnipeg, when negotiations broke down between management and labour in the building and metal trades, the Winnipeg Trades and Labor Council (WTLC) called a general strike. At stake were the principle of collective bargaining, and better wages and working conditions. Within a few hours, almost 30,000 workers left their jobs.

Public-sector employees, including policemen, firemen, postal workers, telephone operators and employees of waterworks and other utilities, joined the private sector workers in an impressive display of solidarity.

Opposition to the Strike was organized through a “Citizen’s Committee” that was formed by Winnipeg’s most influential citizens, newspaper owners and business elites. Resorting to scare tactics, the committee claimed that the Strike a led by a small group of “alien scum.”

Then on June 17, the government arrested ten leaders of the Central Strike Committee. Four days later, the Royal North-West Mounted Police charged into a crowd of strikers, resulted in thirty casualties, including one death.

Known as “Bloody Saturday,” it ended with federal troops occupying the streets of Winnipeg. Faced with the combined forces of the military and the employers, massive imprisonment and further violence from the government, the strikers decided to return to work on June 25.

A Royal Commission which investigated the strike concluded that “if Capital does not provide enough to assure Labour a contented existence… then the Government might find it necessary to step in and let the state do these things at the expense of Capital.”

This goes without saying, because especially in the worlds of politics and economics, if you want an inch, you have to fight for a mile.

I had the pleasure of attending the Winnipeg General Strike Centenary conference in May, and I learned a lot about the Strikers and their struggles. In June, the Confederation of Canadian Unions commemorated the General Strike during our own Executive Board Meeting in Winnipeg.

I often think of the Strikers, and how they would see Canada today in the second decade of the 21st century.

Would they marvel at our universal health care and education systems, the millions of workers who belong to unions and enjoy much better and safer working conditions, and our advancements in workers’ and women’s rights? Or would they be equally disappointed about the growth of corporate power, rising inequality, trade agreements that override democratic rights, and the destruction of our environment?

One thing remains certain. Those brave souls who risked their lives and stood for their rights during the Winnipeg General Strike – many of whom, tragically, will remain faceless and nameless for generations to come – deserve an enormous level of gratitude from workers today in Canada who benefit from the fruits of their struggles every single day.